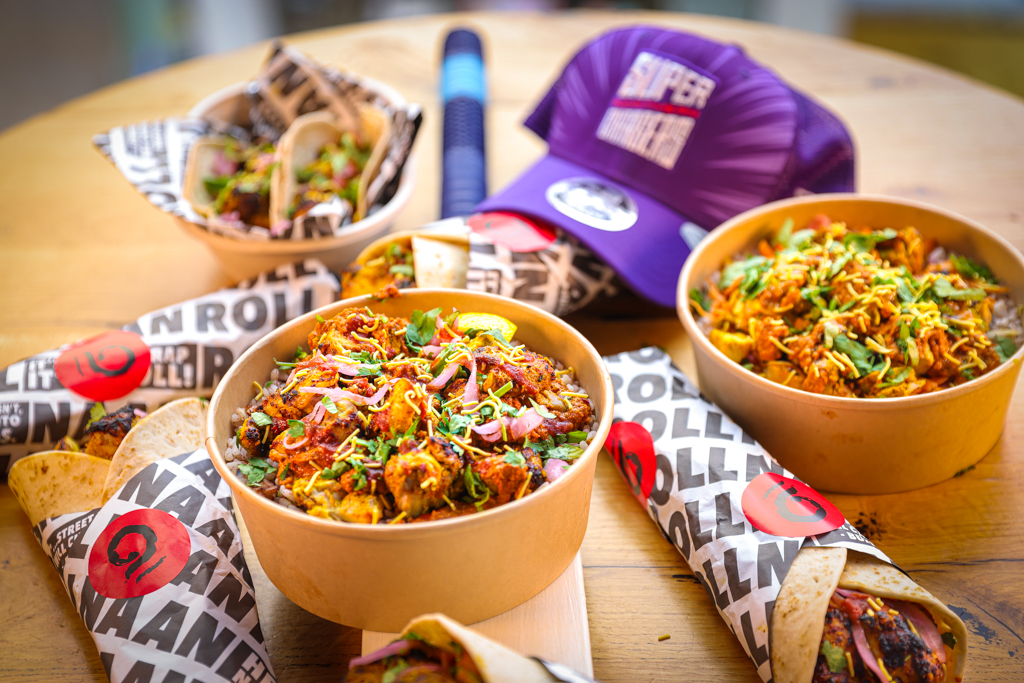 The Northern Superchargers has teamed up with Indian street food sensation, Rola Wala, creating a new dish to mark the return of The Hundred for its second season.

The new ‘Supercharger Butter Chicken’ filling will be available at Trinity Kitchen from Friday 5th August to mark the Northern Superchargers first match in this year’s competition, and is free from butter, ghee or heavy oils. This light and creamy ‘butter chicken’ dish was designed with the whole family in mind, coming in at less than 500 calories in a Spice Bowl, offering all of the flavour without any of the fat.

This street food partnership not only brings a new flavour but also FREE food – with the first hundred customers to visit Rola Wala from 12pm on Friday 5th August able to indulge in the new Northern Superchargers inspired dish free of charge! Foodies will be bowled over when they try this new saucy delight but they’ll have to be quick as the free portions will soon run out.

To celebrate this exciting partnership, Northern Superchargers’ cricketers will be swapping bowling for the naan rolling by helping the team at Rola Wala prepare and serve the new ‘Supercharger Butter Chicken’ dish. International stars and fan favourites including West Indian legend, Dwayne Bravo will be visiting Trinity Kitchen in Trinity Leeds on Tuesday 16th August between 2.30pm and 4.30pm, giving customers the chance to meet their heroes and win exclusive prizes such as signed bats and balls along with tickets to the sell-out games at Headingley Stadium.

Sports fans, food lovers and families alike are invited to come along and meet their cricketing heroes and capture images with The Hundred trophy, whilst enjoying fresh Indian flavours in Leeds’ most vibrant street food venue.

Adil Rashid, spin bowler for the Northern Superchargers said: “It’s a dream come true to be able to play a sport that I love at the highest level, but it’s activities like these that I enjoy the most, being able to connect with fans and spread cheer throughout the local community. I’m hoping everyone brings their friends and families along to try the new Superchargers dish at Rola Wala and build even more excitement around the tournament – we’ve got a few surprises in store!”

Mark Wright, founder of Rola Wala added: “The Hundred is all about inclusivity and providing an experience that’s fun for all the family, and this is why it made perfect sense for us to team up with the Northern Superchargers. We’re really excited for everyone to come along and try our new dish. It was important that our new dish could be enjoyed by the masses, and we’re confident that it’ll go down a treat with our customers.”

The Northern Superchargers will play four fixtures at Headingley Stadium during August:

Tickets are available from £18 for adults and just £5 for juniors aged between 6 – 15 years old and can be purchased here: https://www.thehundred.com/tickets/group-stage.